I attended the estate auction of Miss Rosemary (her name) last week and to my surprise and with a tinge of disappointment I learned that the family photos that I was “rescuing” had been withdrawn by ‘the family’ so she was not alone. There was a box of family memorabilia that I was chasing that included photo albums of a world trip taken in the 1930’s estimated auction price of $22 to $70 but it went for an amazing price of $500 so I clearly was not alone on this rescue mission. I did manage to secure a couple of boxes of Dickens books for $20 and hidden within the boxes were quite a few family pictures dating back to the early 1900’s so it is these photos that I will use to begin my research on Miss Rosemary. Inscriptions were written in the cover for most of the books and from this I have learnt that Miss Rosemary had an elder sister called Elizabeth (Beth) so she was not an only child as I surmised. 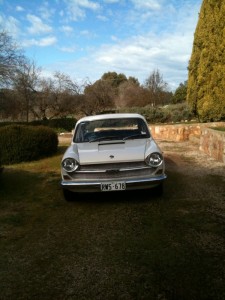 I was not cashed up enough to purchase any of the fabulous old toys which went for huge prices even in their decaying state. However I did purchase something which I was not expecting to and that is Miss Rosemary’s one owner 1968 Austin 1800 original 64000 miles which has been serviced by Taylors of Medindie since new, 42 years! It is registered till October 2010 and been driven by Miss Rosemary until she died a month ago. A beautiful car to drive which I have named “Miss Rosemary”.

Of course with the car came the registration papers and Miss Rosemary’s name and address so of course I went swiftly to the address. Sitting behind a beautifully maintained majestic hedge (must have been to do with keeping up appearances) was a crumbling salt damp ridden house, a sad and depressing site, looked as though it had been uninhabited for 50 years, but she lived within! It is situated on about 4 blocks in one of Adelaide’s elite establishment suburbs and the land must be worth in excess of $2 000 000. Miss Rosemary must have been struggling to pay crippling rates but did not want to sell the home she had lived in since birth. The last remnants of Miss Rosemary will soon be pushed aside by the bulldozers I suspect lucky she is not around to see it. As my research continues I will keep you updated.

Back to GCG business I have finished writing my new labels and have had more great reviews which are up on my web site, one by Chris Shanahan of the Canberra Times, God Bless him, and Jimmy Halliday has given my 2009 Teresa 92 points and 2007 The James Brazill 94 points so I have been blessed once again.

Blessings to you all
Julie